There is no catch. We simply think that it's fair to make sure that you love karate before you put any money in it.
Don't quit! You are already in pain, you are already hurt, so get a reward from it.
To be a champion, you have to believe in yourself when no one else will.
I can accept failure, everyone fails at something, but I can't accept not trying again.
(Michael Jordan)
The ultimate aim of karate lies not in victory nor defeat, but in the perfection of the character of its participants.
(Gishin Funakoshi)
first   previous
next   last

Congratulations to Luba and Stefan who both won a gold and silver medal each at the JKS Ireland Open Championships in Santry. 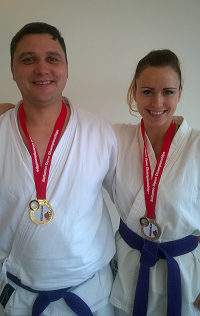 Luba won gold in kumite and silver in kata. Stefan won gold in kata and silver in kumite.
There were competitors from all over Ireland and from Scotland at the event hosted by JKS Ireland Chief Instructor sensei Dermot O'Keeffe.
It is a great honour for SVJ Karate Club to have done so well against such strong competition. We look forward to fielding a team for the SKIF Piltown competition next February.
More pictures in the gallery 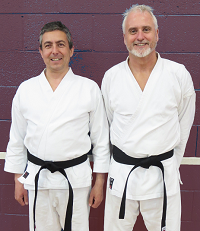 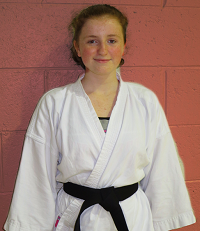 Also a special congratulation to James Mansfield (a former instructor of the club) who passed his Godan (5th Dan). Well done James!

Successful grading with Nobuaki Kanazawa Kancho and Tanaka sensei.
Congratulations to all our students who graded with Nobuaki Kanazawa Kancho and Tanaka sensei.
Pictures in the gallery
first   previous
next   last
Only two members of the family will pay their fees. It's free for the third and fourth.
Don't say you don't have enough time. You have exactly the same number of hours per day that were given to Helen Keller, Pasteur, Michaelangelo, Mother Teresa, Leonardo Da Vinci, Thomas Jefferson and Albert Einstein.
(H. Jackson Brown, jr)
You have not failed until you quit trying.